Suddenly I felt the gravel on my back and I was staring at the deep blue sky above the New Mexico desert.

With my feet still clipped into the pedals and the bicycle between my legs, the rest of my exhausted body lying in an almost star-fished heap on the track was telling me that I wasn’t exactly cutting the figure of someone who knew the magnitude of the task he’d embarked upon. Or, in fact, one who had any clue whatsoever.

‘What the hell am I doing?’

I’d like to be able to say that the sight that greeted the antelope and lizards just north of Hachita on 14 June 2017 had been the result of a spectacular crash, one worthy of future anecdote perhaps. Alas, the truth of it is – this scene of a somewhat chubby and sunburnt Englishman on the New Mexico desert floor was the result of a ridiculously cavalier approach to preparation and a certain degree of foolhardiness and bravado. 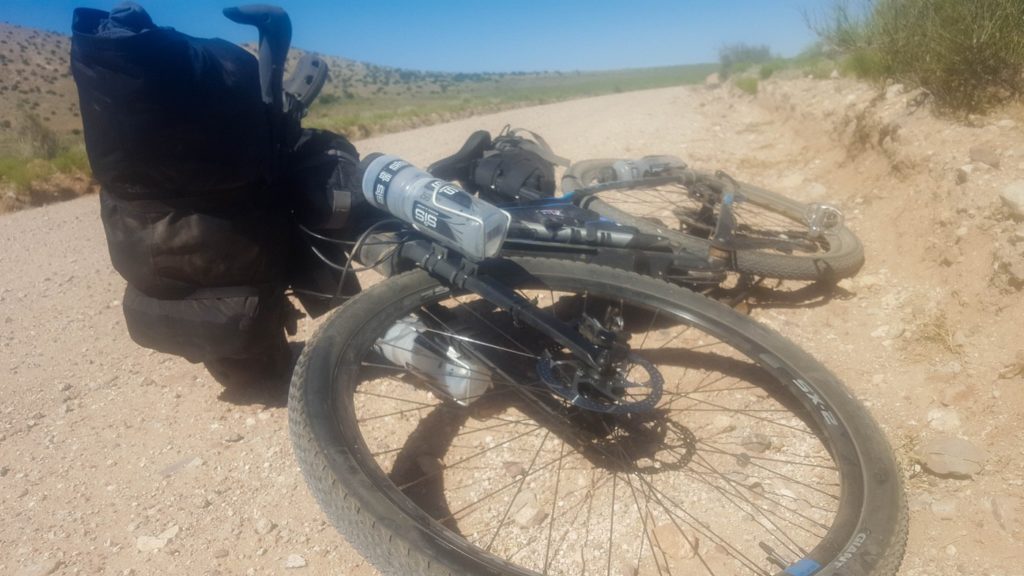 In 2012, I had ridden a bicycle across the US, following the Trans-America cycle route, which, depending on which way you travel, begins in at the Pacific coast in Astoria, Oregon, takes you through Idaho, Montana, Wyoming, Colorado, Kansas, Illinois, Missouri, Kentucky, and, finally, Yorktown Virginia on the Atlantic side. As the years passed by after my first American adventure, I began to hunger once again for the sense of freedom that I’d felt first time around.  So, it came to pass that I decided upon heading out to the US once again to ride along the continental divide, a route that follows the line drawn by the Rocky Mountains, from the Mexico border through the states of New Mexico, Colorado, Wyoming, Montana and across into Canada, finally finishing in Banff some 2,700 miles later. Oh, and most of it is off-road. And often in the middle of nowhere. 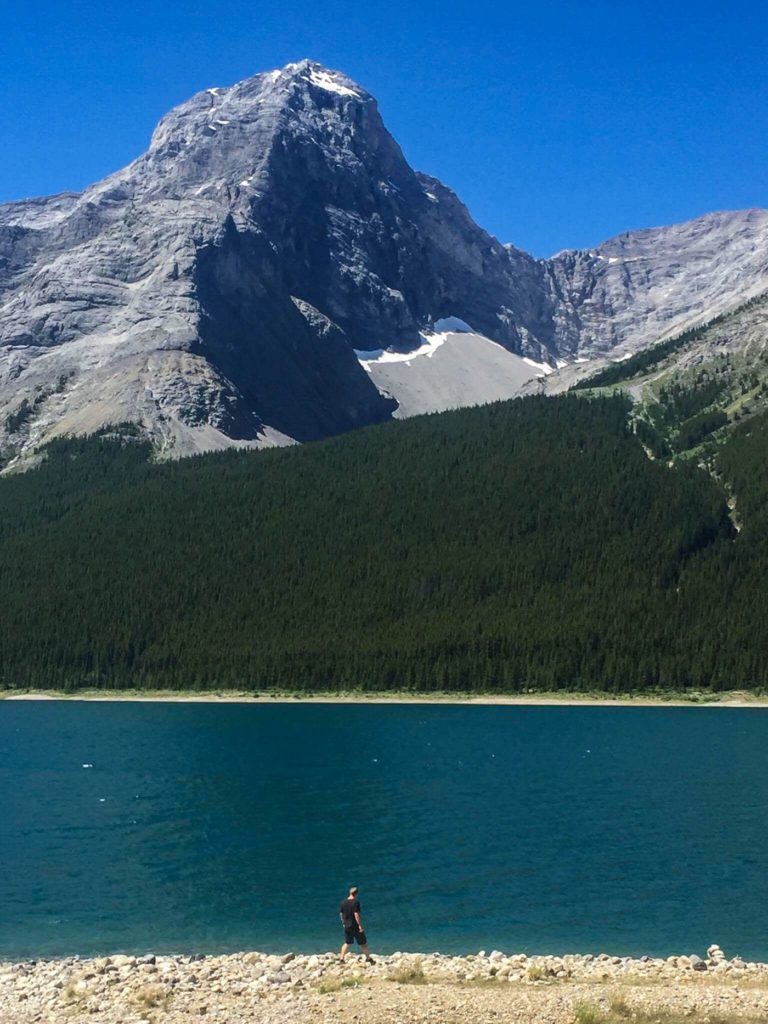 After what can be best described, in hindsight, as ‘lackadaisical planning and preparation’ I flew out to America to embark on a tale of derring-do, discomfort, pain, hunger, exhaustion, or, what I like to call ‘having a jolly good time.’ The first hint of what was to follow hit me as soon as I left sliding doors of El Paso airport. When I left the U.K., it had been about 16 degrees and, let’s face it, probably overcast and drizzling, so it came as somewhat of a shock when I left those doors and walked to my hotel 200m from the airport. Crikey, it was hot. Ok, so 31 degrees at just before midnight is nothing to those accustomed to such climes, but for this English bloke, this was just too bloody hot!

The following morning after the trains, planes, and automobiles – well, a plane, and overly expensive taxi ride, and bus – I arrived in the small town of Demming, New Mexico, a couple of hours ride from the Mexican border and the start of my second U.S. odyssey. It would be here that I would unbox my bike, put it together and then clip into my pedals for the second time on American soil. 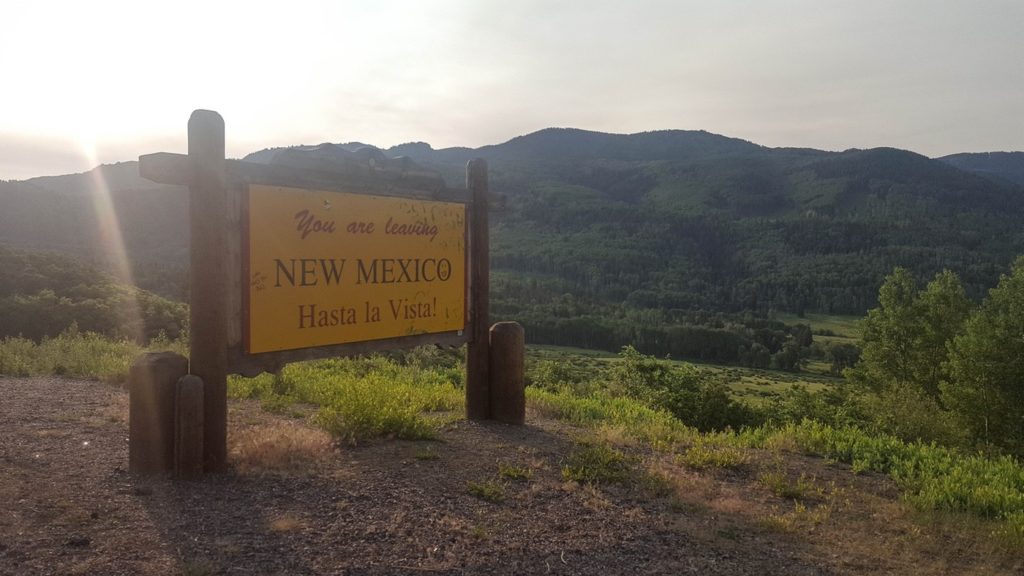 My first impression of small-town New Mexico wasn’t great. Even though I’d been to the U.S before I don’t think that I had seen somebody I would have described as a ‘proper vagrant’, but here was Darrell with his over-flowing shopping cart, dog, and a general appearance of a man who has been sleeping rough for a considerable amount of time.

As he approached, I freely admit that my prejudices overtook immediately: here was this guy, bearded, unwashed, semi-toothless and packing two of the largest hunting knives I have ever seen up close. His long grey hair, unwashed, in the beginnings of dreadlocks framed what turned out to be one of the most fascinating faces I think I’d ever seen. Tanned and gnarly from what had obviously been a tough existence. Do you know what though, sometimes – perhaps nearly every time – casting prejudice based on somebody’s circumstances and appearance can do one a disservice. Also, the necklace around Darrell’s neck, handmade from hundreds of small bits of street detritus was a real thing of beauty. 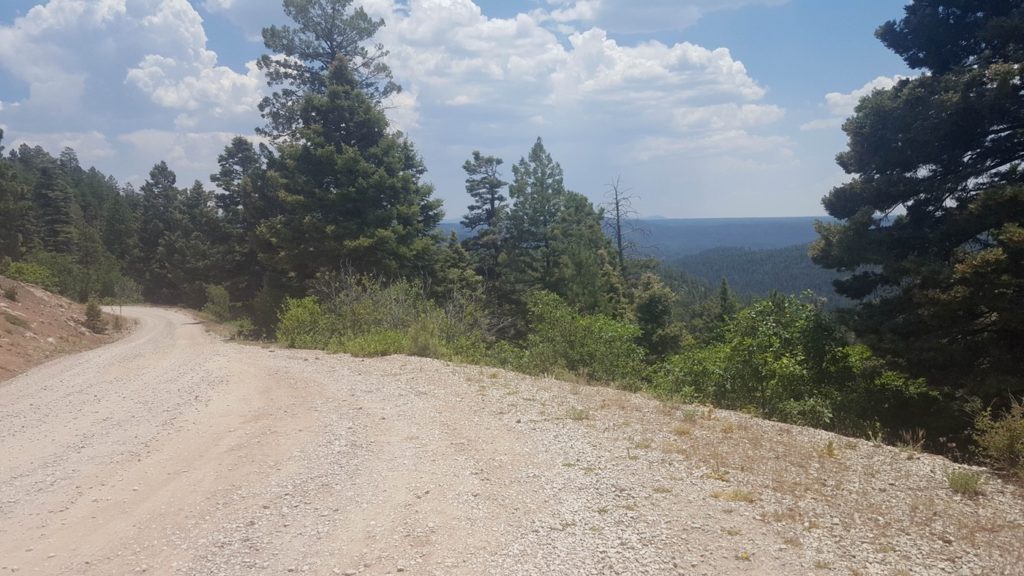 Like most I people I met during my time in the U.S, I was greeted by Darrell with a, ‘Hey, where ya from?’ I never actually know whether to say whether I’m from England or Great Britain or the UK, but as ‘England’ rolls of the tongue a little easier I tended to go with that one. I got chatting with Darrell over an iced tea and, as we talked, I discovered that he had served with the US Marines in the 70s and had spent quite a bit of time in and around London. He trained with the British SAS and Royal Marines when stationed here, and had grown a love for my country, especially the profanity. Particularly the phrase ‘you wanker!’. Oh, how we laughed.

It’s fair to say that I liked Darrell but there was a profound sadness to his story, and one that seems all too common when the veneer of the prosperity of the country is stripped away.  Aside from his service dog and the contents of his overloaded shopping cart, Darrel had all the appearance of a man with nothing. Despite that, and despite the fact he had to carry knives to protect himself from the ‘meth heads and the dealers’ in the town, he was an engaging man of 72 years with a passion for domestic and world politics. 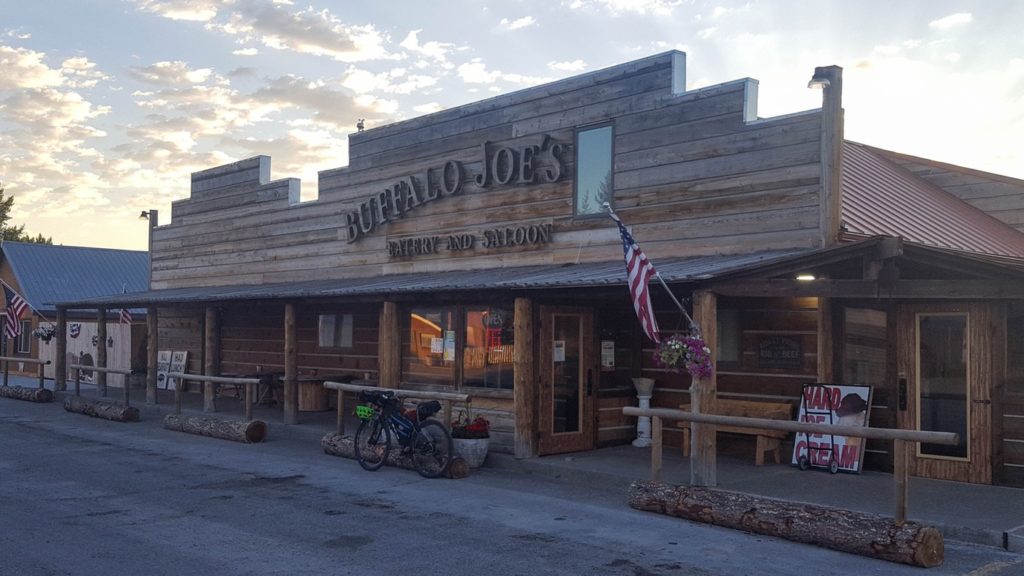 As the conversation followed I found that, sadly, Darrell’s days were numbered – he was suffering from quite advanced leukemia and had been told that he had only around six months left to live. He’d cashed in the entirety of his pension a few years ago so that his children could go to college and have a better life than he, and he now he battled on without medical care. I felt sad as I left him. I hope that he’s doing OK or, at least, is as safe as he can be.

After my fill of cinnamon rolls, coffee, and, generally finding my feet, I set off towards the Mexico border, stopping only as night fell. As I was to do many times in the days and weeks to follow I found a culvert – a drain running underneath the road – and made my bed for the night. As I laid in my sleeping bag I looked up at the sky and just stared. I’m not sure how long I gazed at the stars, satellites, and meteors before I fell asleep, but during that time I felt happy at being outdoors again. 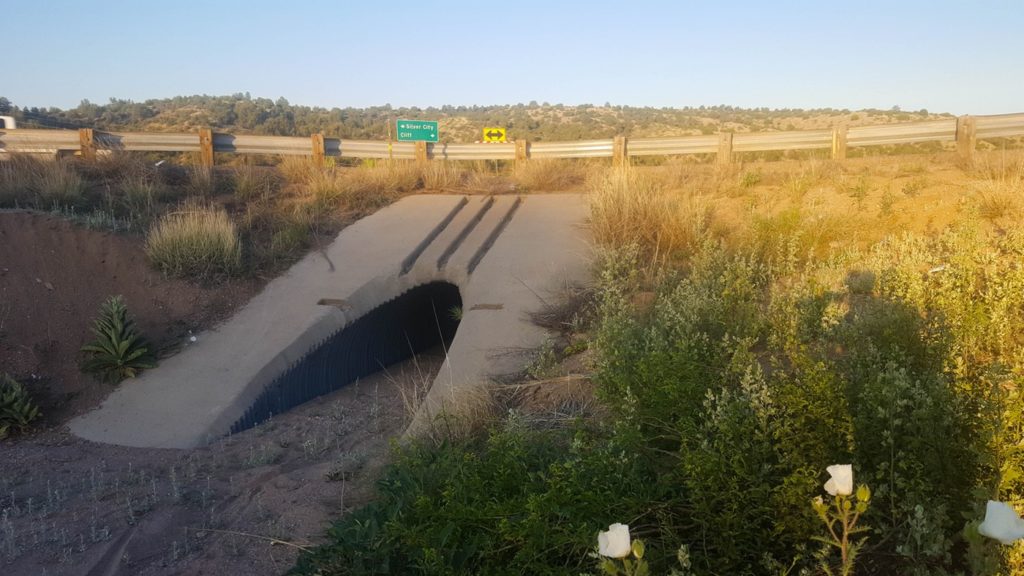 I woke early the next morning and rode the remaining miles to my starting point at the Columbus border crossing. After having snapped a quick photograph I turned around and began the ride proper. 45 miles later, all of which, I may add, was up hill and into a headwind, I arrived in the small town of Hachita, being greeted by a couple of friendly locals who fed and watered me, and who seemed to delight in telling me of horror stories about the New Mexico desert.

At 4.45am the next morning I had packed up with five and half litres of water, a load of food, and an optimistic attitude despite the warnings given by locals. The stars still shone and the air was chilly, but it felt great to be moving. Well, it did for a while.

And then it started to go wrong… 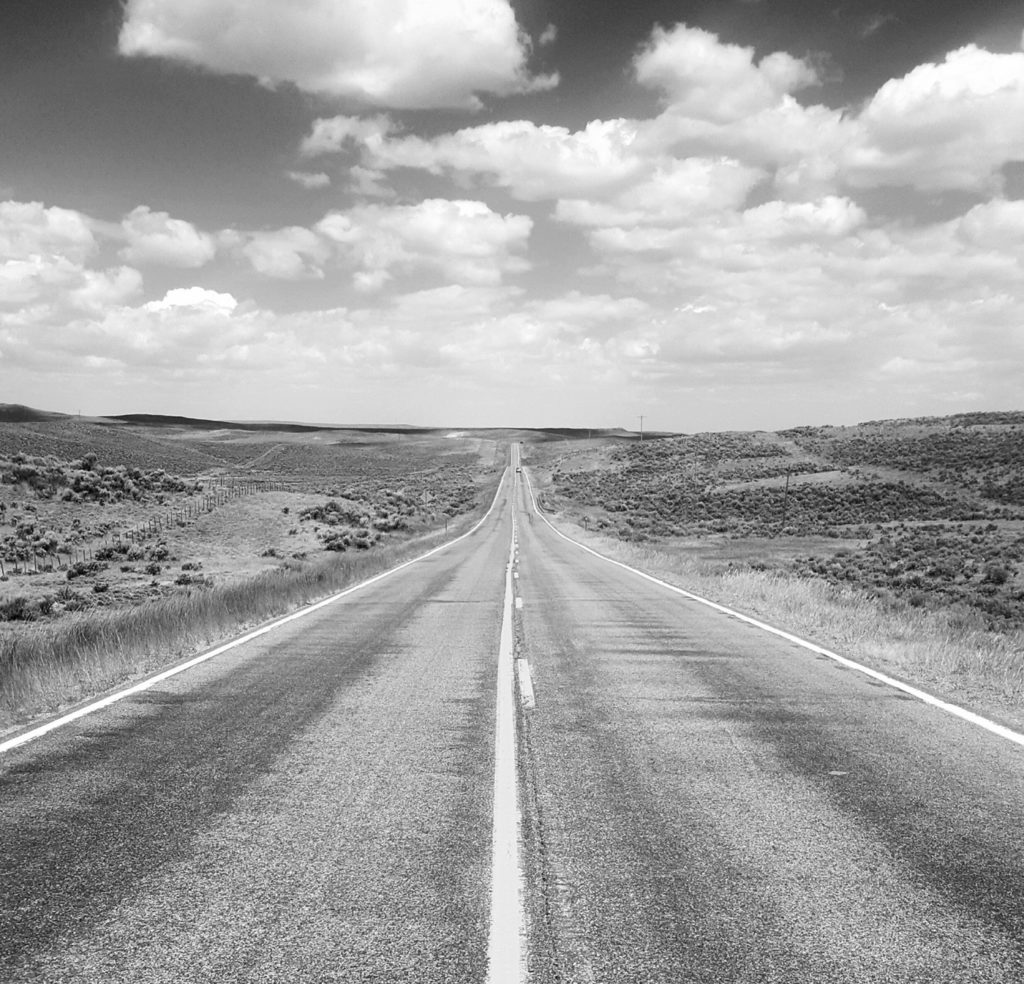 So, it turns out that it probably does pay to listen to the locals. This desert, although not actually that big, well and truly kicked my arse. I’d packed food, had water, and a purifier so that I steal water from the cattle stations, but it just never seemed enough. Recall the feeling of dehydration you get at 4.00am after having drunk too much? Well, that. And no matter how much I drank, or how I tried to keep my mouth shut, I felt like I was a permanent state of thirst. In addition to the water I carried already I must have purified another five litres, but it still didn’t feel like enough. Then it started – cramps in my fingers. I ignored it. Then, after having refilled my bottles I stood up and promptly nearly fell over. I ignored it. I then started getting cramps on the inside of my thighs. Still, I ignored it and just carried on.

Then it happened – as I pedalled slowly up the track I got a cramp in one thigh, but as I tried to remove my foot from the pedal I immediately got cramp in the other. I was now stuck, cramp in both legs, unable to pedal and quickly losing what little speed I had. Not only were my legs stuck in place, but there was now a loud, electrical-sounding buzzing in my ears. Within a second my vision had gone grey and I collapsed sideways onto the ground. 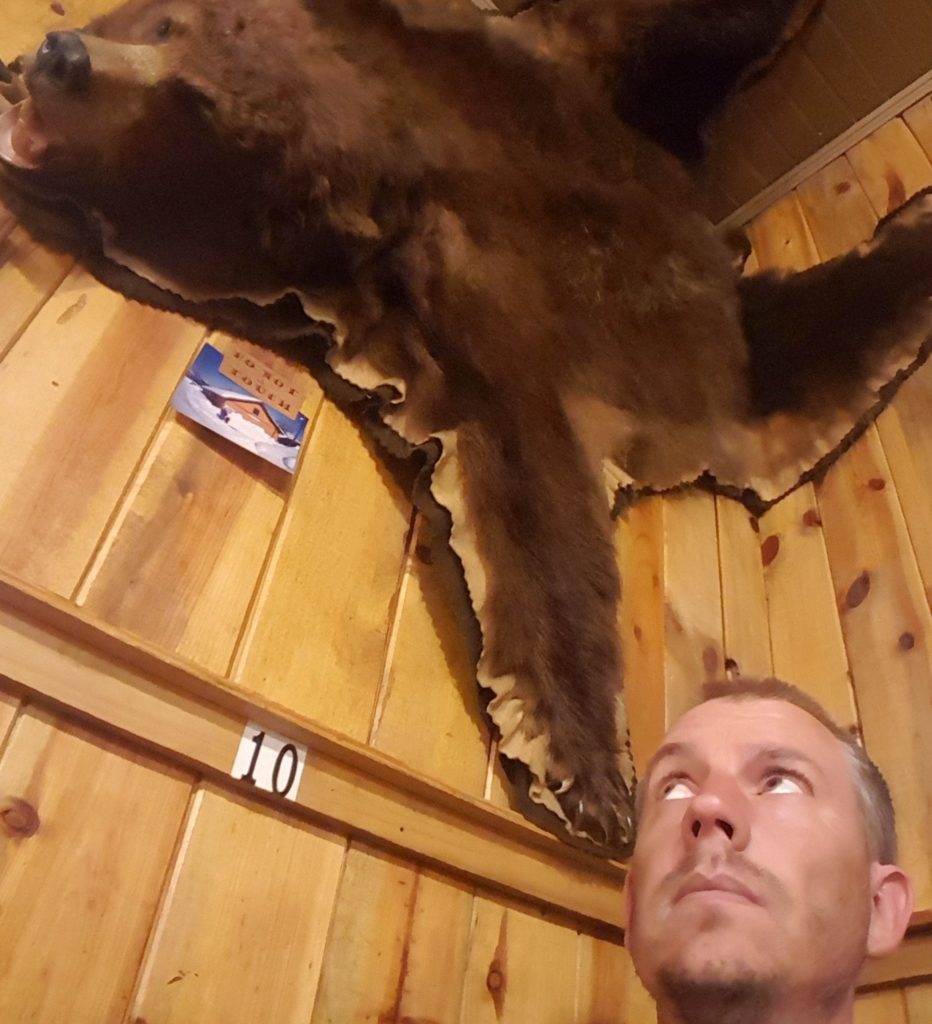 It was at this point, on day two, that I realised that I had, perhaps, bitten off a little more than I could chew. As I lay underneath my makeshift shelter for the next five hours I couldn’t imagine how I could muster the energy and will to ride the rest of the route. I’d not even completed 100 miles, but if somebody had driven past and offered me a ride straight back to El Paso airport I would have accepted the offer in a heartbeat.